skip to main | skip to sidebar

Carmined Pout, I have Me

Look, I write some thing about self...

Don’t remember since when I have been squinting my eyes. It might be the 5th grade, or it might be 3rd. On the old H.S. photos I don’t wear glasses, but on the one taken my freshman year at the first college I do. It always been a nuisance at best, and undesirable distinction at worst. With years my nearsightedness worsened, making wearing of glasses an all-day affair. I have friends and colleagues that don’t remember me without the glasses - the ridiculous alien concoction became part of my body, of the image people associate with me. Change of frame brings “you look so different”s, as if I colored my hair fire-red or shortened my nose. The bigger the negative numbers on my prescriptions grew, the smaller my eyes looked, behind the lenses. Festive occasions have always been a disappointment to dress for - spectacles ruin effect of bare shoulders and carmined pout. Contacts don’t do it for me - I was told I don’t have enough natural tears (not anymore, anyway), and to use artificial ones I’d have to stop for drops every 15 minutes.

Yesterday I got a new pair of eyes.

I am so excited and in a complete tizzy! Some old guy named Brian wrote on his blog that he liked my boring photos that I pride myself on. Ah, babushka, my blushing cheeks! I even linked to his compliment at my special Blog Place that I call "my salon."

Ah, Brian. Brian. Nobody..ever...said anything remotely… (and I know I need to learn how to crop and resize and edit and mask and tint a bit. Some day. I promise nothing.)

More Racism You From Me Get!

Look, here is what I wrote today at 2blowhards place. It is so Me, is it not?

"About people helping each other. I think we all had the taste of how it'll be on comparative examples of how population behaved during hurricanes. Katrina - in NO and Ike - in Tx. Katrina was a disaster, exactly because residents of New Orlean were sitting there helplessly waiting for their government to take care of them, while Texans (devasted not less than NO) took the matter in their own hands."

See? I blame the victims of Katrina! That is just how I roll, babushka.
at 6:01 PM 7 comments:

People Are All Stupid, My Friends 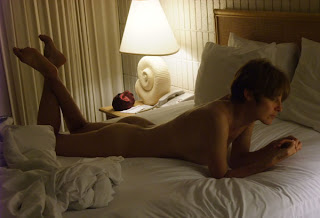 I like to start the arguments on other blogs when I can't start them at my place. I like call my blog "my place" like it's a real place. I am insane, nyet?

Once, I got into it over at another blogger's place, talking about mature women cougars. To prove point, I post a picture of my live journal friend. Then I report that she look better than her own teenage daughter when nude. Uh-oh. How I can know this??
Am I insane? Oh yes, I just told you so. This was trick question. here is my nude friend. Tell not her poor daughter, nyet.

Labels: more me, my "friends", please please love me

I have no scruples, why should I?

Obama’s suspension of his campaign, so that he can fly to Hawaii and see his ill grandmother, is a timely reminder to wavering voters that: a) he respects his elders and is a real family guy; b) he’s young enough to have grandparents; and c) he was brought up by white folks, so is probably not an Islamic terrorist. The whole scenario is so perfect that we must hope Obama’s aides did not put strychnine in the old woman’s tea!

To his defense, though, I have to say the piece was written on Oct 22…oh wait, was it an advance hint ?

This is the post where I, Madame Tolstoy, compared the neo-Nazi plot against Barack Obama to the Reichstag fire (said to have been a plot by Hitler to enable him to curtail civil rights in Germany)

How fast can you say :”Reichstag fire“?

See how this mind of mine works

Here's what I, Madame Tolstoy posted on November 4:

Who’s got more candy? Today’s the day to find out.Although, as one of my managers told me yesterday - Obama grandmother’s strategically timed demise might get him that one sympathy push for all-important advantage.Will it? Let’s prove him wrong!